Dana GRUIA DUFAUT, member of the Paris and Bucharest Bars Associations, founder of the GRUIA DUFAUT Law Office, was invested as Monaco Destination Ambassador during the meeting of the “Destination Monaco Ambassadors‘Club” held on September 11, in Bucharest, in presence of H.E, the Ambassador of the Principality of Monaco in Italy and Romania, Mr. Robert FILLON, and of the Honorary Consul of the Principality of Monaco in Romania, Mr. Sergio FALESCHINI.

The “Destination Monaco Ambassadors‘Club” of Romania gathers 23 proeminent Romanians, operation in different fields of activity, who are motivated and committed to promote the exchanges between Romania and the Principality of Monaco, throughout their professional and personal relationships.

The ambassador of Monaco, Mr: Robert FILLON, and the Honorary Consul of Monaco in Romania, Mr. Sergio FALESCHINI, welcomed the participants and reminded them of the importance of the role of the Destination Monaco Ambassadors in the development of the business relationships and partnerships.

Dana GRUIA DUFAUT was nominated for this title during the meeting of the members of “Destination Monaco Ambassadors’ Club”, held on the May 6; 2019, in Bucharest.

“With my being accepted into the exquisite Ambassadors’ Club of Monaco, I am ready to do my best in order to promote business development between Monaco and Romania. I am persuaded that the Principality of Monaco and everyone of you, who are present here tonight, shall be by our side to back us up in achieving the purpose that brings us together, which is the promotion of the European values and business”, declared Dana GRUIA DUFAUT, during the official ceremony. 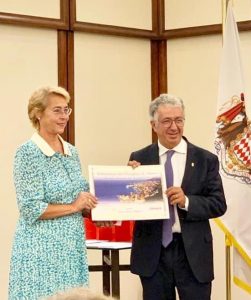 The state of a country's infrastructure explains its economic position. And while the market provides opportunities, investors need legal guarantees. Read more

COVID-19: THE LATEST RESTRICTIONS ON THE MOVEMENT OF PERSONS AND TRANSPORTS

New measures aimed at containing the spread of the virus COVID-19 on the national territory have been laid down by the Military Order no. 7/2020 of the Ministry of Internal Affairs published in the Official Gazette no. 284 of Saturday, April 4, 2020, meas Read more

COVID-19: EUROPEAN GUIDELINES TO GET BACK TO WORK IN SAFETY

The European Commission published on April 24 some good practice Guidelines for getting back at the workplace, a Guide aimed at helping employers and employees to stay safe and healthy in a working environment that has changed significantly because of the Read more

The GRUIA DUFAUT Law Office successfully represented in court the shareholders of one of the largest groups of companies acting in sugar processing industry, who turned against one of their competitors over the breach of a letter of intent (LOI) for the p Read more